Making a good print is about more that the tools and technology. The technical and artistic skill of the printmaker is as important as ever. Whether you a re making lithographs or fine art ink-jet prints, you still need a master-printmaker to get the best possible prints which do justice to your art. 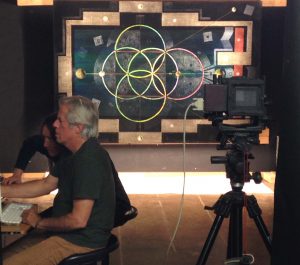 The Studio was founded in 2002 by Barry Norris. Barry Norris has photographed extensively in Chiapas, Mexico where, between 1977 and 1992, he worked as a photographer and printer and raised his family. Moving back to the States in 1992, Barry, his wife, Joan, and son Chan K’in chose San Cristobal, New Mexico as their new home. They kept their home in Mexico and drive to Chiapas every year to photograph and be with family and friends.

The Studio, which started out in Barry’s home is now a 2000 sq ft. facility with the latest generation of Epson Printers, computer hardware, scanners, cameras, software and the expertise of a team of two with over 30 years of collective experience, ranging from traditional fine art photography and darkroom printing to digital color-management and of course, fine art digital printmaking. We also have experience with conceptualizing and creating exhibits and mounting fine art installations internationally.

Why should you print with us?

With all of the technology at our disposal it would be easy to assume that digital printmaking was a push-button affair. This is no more true of printmaking today than it was 150 years ago. To be a fine art digital printmaker today requires an equal measure of technical and artistic skill. At Barry Norris Studio we have created a completely custom, in-house, color-managed setup which allows us to create fine-art giclee prints to a higher standard and with a greater degree of subtlety and dynamism than most other “giclée printers”, particularly the larger commercial ones.

In addition to all of the state of the art equipment, we believe that we have the artistic sensibility and skill to help you realize your creative vision. We have worked with many of the major artists in the Southwest area, namely; Richard Nichols, John Farnsworth, JD Challenger, Nancy Ortenstone, Tracy Turner Sheppard, Bill Davis, Tom Noble, Bill Baker, Ted Egri, Jack Smith, Margaret Nes, Ed Morgan, Rory Wagner, Father Bill McNichols, Lynn McLain, Charles Ewing, Miguel Martinez, Ed Sandoval, Craig Kosak, Dorothy Lampl, Dan Enger, Charles Strong, Alex Harris and many other notable artists. The list is only representative and is certainly not exhaustive.

‘Giclée Printing’ can be done on an array of fine quality papers, canvas, fabrics, vinyl and vellum.